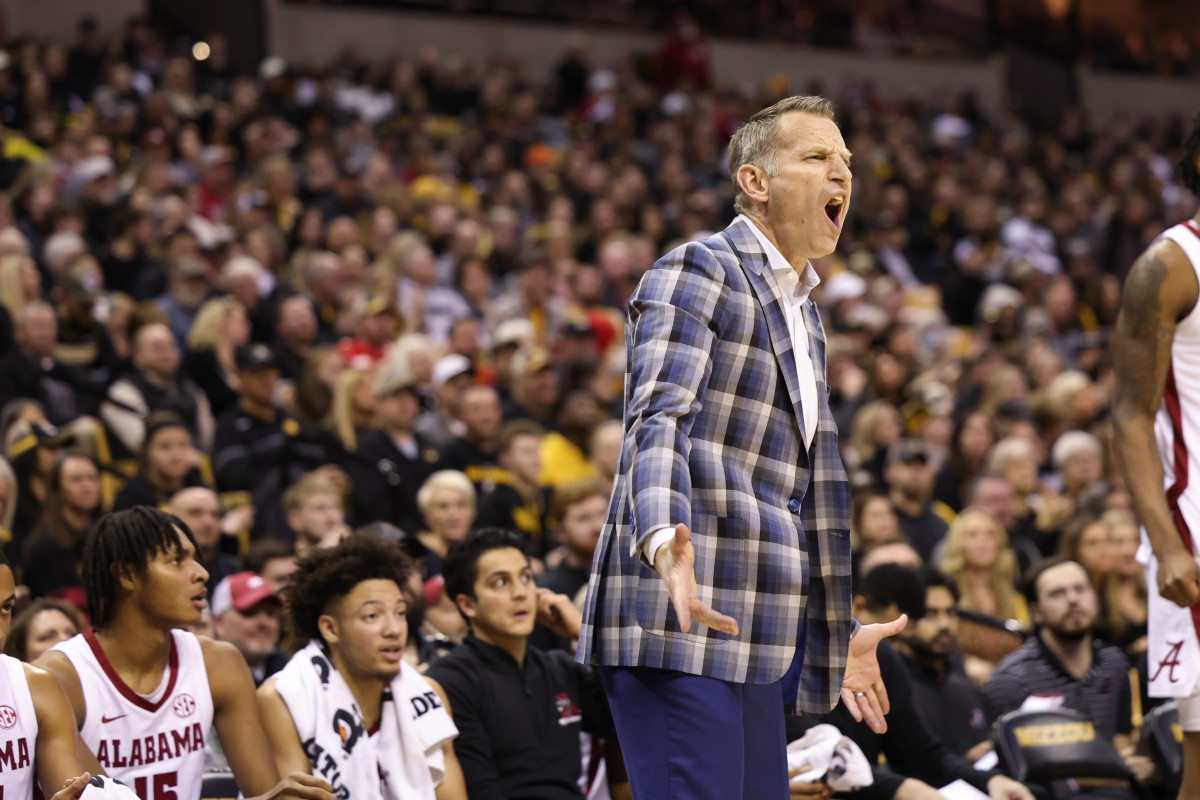 Nate Oats said this team has the best internal competitiveness he's ever seen that pushes each other to get better.

TUSCALOOSA, Ala. — Alabama has reached its highest ranking in the polls since 2002. With 11 games left in the regular season, the Crimson Tide at 17-2 (7-0 SEC) is two wins away from matching lasts years overall and conference win totals.

More than halfway through the season amidst great success, head coach Nate Oats is still utilizing an 11-man rotation at times, and with Nimari Burnett returning from injury, the starting lineup could change again.

Because of all this, jealousy or complacency could sneak in, but that's not how Oats sees it as the Crimson Tide returns home to Coleman Coliseum for a matchup with a struggling Mississippi State (12-7, 1-6 SEC) team Wednesday night.

"We talked about not getting complacent and how maybe last year's team did after we had some early non-conference wins," Oats said at Tuesday's press conference. "But I think this group’s pretty mature— the maturity, the professionalism, the depth of the team, all of it helps.

"Guys are mature and understand what we've got at stake. We’re playing for a No. 1 seed in the NCAA tournament. We’re playing for an SEC championship. You can’t afford to have a letdown. If you want to be playing your best basketball in March, you've got to continue to get better every game.”

For example, at Tuesday's practice, Oats said freshman Rylan Griffen told Burnett that he wants to be like him on defense. Griffen had his best 3-point shooting performance in the win against Missouri Saturday, but after the game, Oats said he wants to see the freshman continue to improve on defense to reach his full potential. Burnett is known as one of the best defenders on the team and provides an example for Griffen to emulate.

"Guys are challenging each other in practice every day," Oats said. "We’ve got 11 guys that can all really play. It’s hard to distribute minutes amongst 11 guys, so there’s a competitiveness, and it’s probably the best I’ve ever seen. It’s a competitiveness while still really pulling for your teammates to do well too."

Having depth is a good problem for a coach to have, but Oats talked about the challenges of managing the minutes for 11 players. But ultimately, players stay happy if the team keeps winning.

And winning is all Alabama has experienced lately. It's been over a month since the Crimson Tide has lost a game, and the team is currently on an eight-game win streak with all eight wins being by double digits.

The first matchup against Mississippi State in Starkville started the streak of SEC wins back on Dec. 28, and it was actually the smallest margin of victory for Alabama during this streak at just 11 points. Oats isn't necessarily concerned about how many points the Crimson Tide wins by, but he does want his team to play better, particularly on defense, than it did in the first meeting with the Bulldogs.

Alabama hosts Mississippi State Wednesday night at 8 p.m. on SEC Network as the Crimson Tide tries to extend that winning streak and stay on the path to a No. 1 seed in the NCAA Tournament.

B
| NEWS After Forcing Kentucky to "Burn the Tape", Alabama Basketball Must Maintain Momentum - Sports Illustrated

| MBB/WBB Alabama basketball looks to freshmen, transfers for a steadier ride in 2022-23