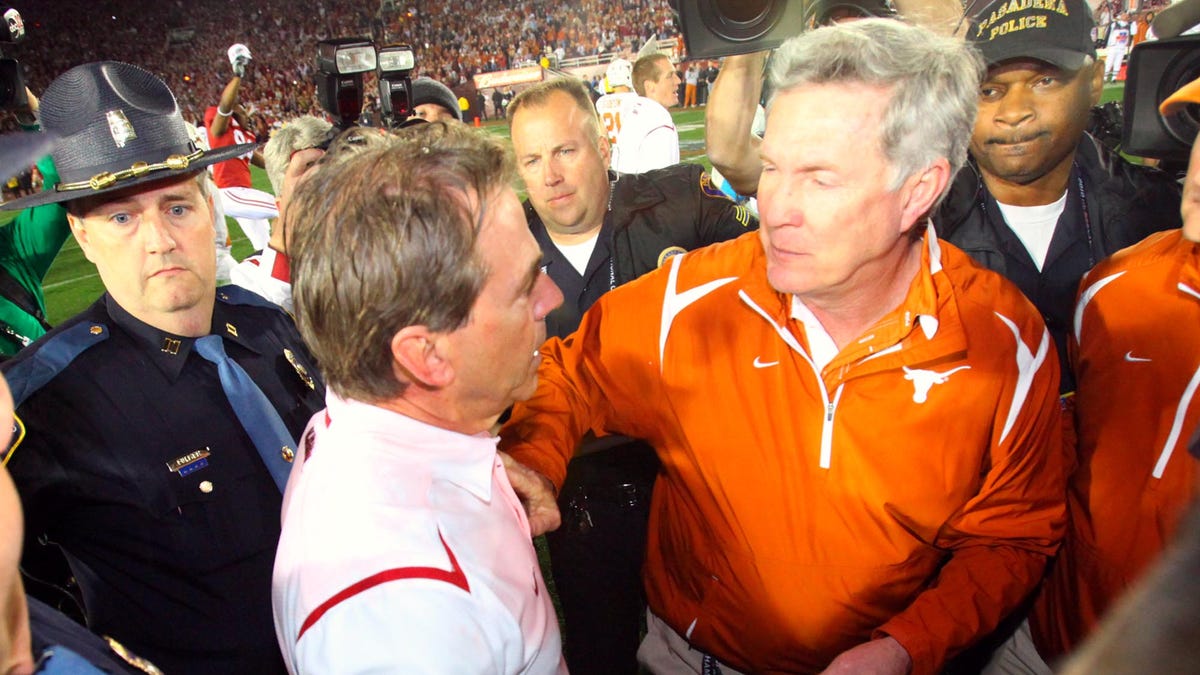 On Thursday, Alabama football coach Nick Saban spoke about the rumors around him and Texas from a decade ago.

Nick Saban is about to coach against Texas on Saturday for the first time since Alabama won its first national championship in 2009.

He hasn't even coached at Darrell K Royal-Texas Memorial Stadium before, where No. 1 Alabama football (1-0) will play the No. 22 Longhorns in Austin, Texas (11 a.m., FOX).

And Saban denies he ever had interest in coaching at that stadium on a a regular basis. He was adamant about that Thursday during his weekly radio show. There was rumored interest on behalf of Saban in Texas about a decade ago.

"I never even talked to them and I wasn’t interested in the place," Saban said.

Saban added that coaches damage relationships when they do something like that.

"Mack Brown is a good friend of mine and someone I have a tremendous amount of respect for," Saban said. "He’s the coach there (at the time), and all anybody is talking about is me going to take his place."

Former Texas regent Tom Hicks only contributed to the rumors further when he went on a podcast in 2019 to discuss the courting from a decade ago and said he had a conversation with Saban's agent, Jimmy Sexton.

"He said ‘if Saban was a business guy, he’s what you’d call a turnaround artist, he’s not a long-term CEO,'" Hicks recalled Sexton telling him. "'He likes to go someplace, fix it, win and go on. He knows he’ll never catch Bear Bryant’s legacy at Alabama. But he’d like to create his legacy that he’d won more national championships at more schools than anybody else. He’s already done it at LSU, he’s already done it at Alabama. He knows he could win a national championship at Texas. He knows he can.'"

But Saban later signed a long-term contract extension with Alabama in 2013, and he denied having interest then to ESPN.

"The way this sort of got spun, it was a little bit more like, 'OK, he got a new contract at Alabama, so he's going to stay at Alabama instead of going to Texas,'" Saban told ESPN in Dec. 2013. "I never considered going to Texas. That wasn't even a conversation."

Saban was aware that if Brown stepped down, there would be an opening,, but it wasn't something Saban was interested in filling.

Saban said then what he said Thursday. He respected Brown, who re-signed from Texas in Dec. 2013.

"He deserves the right, based on his body of work, to be able to leave the program the way he wants to leave the program," Saban told ESPN in 2013. "It wasn't fair to him or to me to be speculating about this job, which I haven't talked to anybody there about."

Saban is now in his 16th season with the Crimson Tide and has won six national championships so far with Alabama.

B
| NEWS Texas week has arrived for Alabama football. Here's what stands out to Nick Saban - Tuscaloosa News

| NEWS Nick Saban on first radio show of season: ‘I like this team, I really do’ - AL.com