Thread Starter
Scholarship Club
The story of the Tide over the last decade or so is somewhat analogous to the plight of Tommy Lewis. Some here, amazingly enough, may not know the story of Tommy Lewis so let me enlighten you.

On January 1st, 1954, when Bear Facts was a strapping young lad, Red Drew led his team of Crimson Warriors into the Cotton Bowl to face the Rice Owls and their prolific runner, Dicky Moegle. (Moegle later changed his name to Maegle because everyone would always mispronounce his name.) Even in those days, for those rivals that think Alabama had no tradition before Coach Bryant, Alabama played with a passion and pride that elevated itself to the nation’s “bowlingest” team.

Bart Starr and the Crimson Tide offense could not come close to replicating the efforts that Moegle displayed that day in Dallas as he rushed for touchdowns of 79, 95 and 34 yards. The Owls soundly defeated the Crimson Tide 28-6. There was only one time, really, that the Crimson Tide ever slowed Moegle down that day.

Texas A&M prides itself by calling their fans the “12th Man”. Tommy Lewis became the actual “12th Man” for Alabama that day. The Dallas Morning News journalist, Bill Rives, described the “event of the day” like this:

“Fullback Tommy Lewis, leaped off the bench as Moegle was roaring past it, along the 45-yard line, and downed him with a fierce block.
At the time, Moegle was steaming along with only one man having a chance – and that a doubtful one – of stopping him.

Lewis, under a sudden compulsion which he could not deny, came off the bench like a rocket and cut down Moegle with a perfect block. Then the Alabaman, who is alternate captain of the Tide, retreated quickly to the spot he had vacated and sat there with his head down in acute embarrassment as Coach Red Drew stood before him and looked at the crushed youngster in disbelief at what he had seen. Referee Cliff Shaw ruled that Moegle should be credited with a touchdown. The play had started on the Owl 5-yard-line and thus was good for 95 yards.”
Click to expand...

That play, witnessed by Rives and 75,504 Cotton Bowl fans, has now become notorious in the history of college football.

“Lewis, sobbing on the bench, was inconsolable. After Rice had wrapped up a 28-6 victory, he apologized to Moegle as they walked off the field, telling him, ``Man, I'm so sorry I did that,'' Moegle recalled. Lewis was crying.”
Click to expand...

In the last 15 years, Alabama has had its fair share of embarrassing events take place. We have been placed on probation twice, made bad choices for Head Coaches and have seen extended losing streaks against hated rivals like Auburn and Tennessee. Most of the problems that have faced Alabama are rooted deeply in something people like to call the “Good Ol’ Boy Network”. These guys absolutely put the word “dysfunction” in the word “dysfunctional”. They may have been well-intentioned but their methods were completely flawed and ignorant.

Our Athletic Director, Mal Moore, has been much maligned by both fans and alumni of the University of Alabama and in some cases, for very good reasons. Despite this, Coach Moore has forged ahead by taking the lead and having on-campus facilities improved. No one can question the pride that we all have in our facilities at Alabama and Coach Moore has been responsible for most of it. He also finally put his foot down to the mediocrity that was creeping into the football program after Mike Shula took control of the team 5 years ago. He did the unthinkable and hand delivered Nick Saban to the University of Alabama from the National Football League, personally. Yes, the price was high and Saban’s departure controversial. With all of the recruiting wars being won by this Coach and his staff, the investment is already paying dividends.

So what makes hundreds of thousands fans that follow this team so fanatical? What drives grown men to do the blunder headed things they did, things that ended up hurting the program? What drives an Athletic Director to, in the face of constant criticism, work so hard to raise money and improve facilities for a group that had seemingly abandoned faith in the man? What drives rich alumni to help pony up and pay an NFL Coach, a winner, 4 million dollars to lead a college football team? Finally, what would drive a player off of the sideline to tackle a guy that was going to score on his beloved team in front of thousands of witnesses?

‘Later, he (Lewis) wept unashamedly in the locker room and told reporters, ``I guess I'm too full of Alabama.''
Click to expand...

I guess we are all guilty of being “too full of Alabama”.

There’s nothing like it folks. Here’s to a great season and the beginning of the Saban Era at Alabama. Think like Champions and we will become Champions……again!
RTR!!! 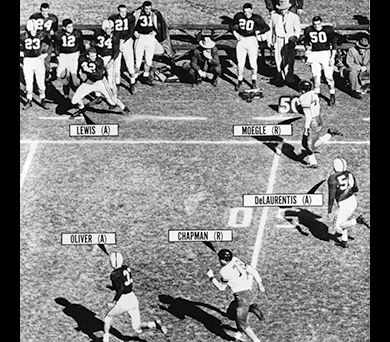 Century Club
Good article. I'm guilty of being to full of Alabama myself.

BigAl said:
Good article. I'm guilty of being to full of Alabama myself.
Click to expand...

Thanks, BigAl. I always try to write at leat one "fluff" article as 'chop calls them beofre kickoff. I was hoping I would have enough time to get it together this year and my boss let us off early today.

BigAl said:
Good article. I'm guilty of being to full of Alabama myself.
Click to expand...

Thanks, BigAl. I always try to write at least one "fluff" article as 'chop calls them before kickoff. I was hoping I would have enough time to get it together this year and my boss let us off early today.
Click to expand...

Sideline Club
right now, I'm too full of Dreamland bbq. We need one in Memphis. Doubt it'll ever happen though. At least I bought 3 jars of sauce to take back home.

I know I'm too full of Alabama. I gave myself the annual "it's just football" talk earlier today.

Question about the Tommy Lewis incident...the writer states no one would have caught the Rice runner in all probability. It sure looks like we have 2 Tide players closing in on him. ;scr

BamaDelta said:
I know I'm too full of Alabama. I gave myself the annual "it's just football" talk earlier today.

Question about the Tommy Lewis incident...the writer states no one would have caught the Rice runner in all probability. It sure looks like we have 2 Tide players closing in on him. ;scr
Click to expand...

If you were to watch the video, Delta, you would see that those poor 2 guys didn't stand a chance.
G

Century Club
Here is the video.Sorry, I spelled Moegle's name wrong . I must have been full of Alabama at the time.

BamaHeat said:
Here is the video.Sorry, I spelled Moegle's name wrong . I must have been full of Alabama at the time.

Thanks for the vid, BamaHeat!! ;tr
I

Extra Point Club
I'm so full of it, that all the poop has been pushed out!
T

it looks like player 33 had the angle on him, but i digress